>Tek had tubes put in his ears today. We had to be at the hospital at 5:3o a.m. The surgery only took 10 minutes, however the standard hospital waiting time (you know… the time they make you sit around and do nothing so that they can act like they are doing really important things even though your child is the only one in the department) was around 3.5 hours. Andy and I could barely keep our eyes open.

Tek handled it all like a champ. He cried a bit when he came back from the surgery but within twenty minutes he was sleeping in mama’s arms. Of course, all of the nurses just hovered over Tek declaring him to be the cutest baby ever. He is used to all of the attention, he works it like movie star. I have a feeling that as soon as he learns to write his name he will be handing out autographs.

Here are a few pictures from today’s event. 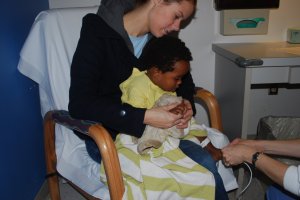 1 thought on “>Our Little Champ”