>One of my favorite experiences in Ethiopia (I have a feeling by the time I am finished with all five lessons, I will have about 25 favorite experiences) was meeting Abebech Gobena. Abebech is known as “Ethiopia’s Mother Teresa.” In the 1980’s she was traveling on a religious pilgrimage to the Northern regions of Ethiopia. This was the time of the great famine in Ethiopia. To understand the significance of this famine you need to first understand its magnitude. It killed hundreds of thousands of people and left over a million destitute. Many factors contributed to the cause of this famine, but all studies are clear that the people who suffered were innocent bystanders to circumstances beyond their control. Many of you may remember the pictures that flashed across the television of the famine victims. If you’ve never seen the images, I suggest you stop reading here and do a quick internet search. The images are frightening. Have you ever seen the HBO series, “Band of Brothers?” If so, remember the moment when the American soldiers stumbled upon the first Nazi concentration camp? The soldiers stood frozen as they gazed upon hundreds of Jewish prisoners literally wasting away to nothing. Many of the soldiers immediately got physically ill at the sight of a human condition they have never encountered. In that moment the American soldiers became aware of the reason why they were fighting and they became passionate for their cause. Abebech Gobena reached her own moment of awareness of a devastating human issue facing her country when she arrived in the Northern region and came face to face with people so thin and sick that they are more like breathing corpses than human beings. Due to lack of good media sources and tighter government control, many people in Ethiopia were unaware of what was occurring in the North. Gobena was no exception; she was shocked at the sight of her own people dying in such an inhumane manner. As she walked through fields of dying victims she saw a baby sucking on its dead mother’s breast. Without any additional thought, she reached down and picked up the child. This child became the first of literally thousands of children she would impact in her lifetime. She came home from that trip with two orphaned children. And was the beginning of her organization, AGOHELMA.

Abebech started orphan care in her home from that day on. Because of this, she faced many problems and paid many sacrifices. Her husband divorced her, divorce is still to this day not socially acceptable in many cases, but even more so devastating during the time of hers. Her family disowned her. She moved into the forest with her children and made items to sell in the market. But this woman was not only a survivor but a person that can effect change. She is in her eighties now and still runs her organization which has grown beyond what she could have imagined when she picked up that first child. When we arrived at her organization we were thrilled to hear she was there and she wanted to meet with us. She is a woman with kind eyes and a sweet spirit. She didn’t speak English so she has an interpreter. But we were going to a part of town where we were clueless so we brought our translator who is AMAZING. Samson was so excited to get to meet her and was even more excited to take his picture with her and before we even left the property was texting all his friends telling them he spent time with her. (She is a national celebrity for her selfless work.) She told us how she got started and everything the organization does. I could go on for literally pages about everything it does, but I will do my best to just give you a quick rundown. It still functions as an orphanage, just as she began in the 1980s. They currently house around 150 orphans. Few of the children in the orphanage are adopted. As I’ve stated before, adoption is somewhat rare in Ethiopia (considering the number of orphans). Abebech doesn’t seek to find her children homes; she leaves that to the agencies that specialize in that. Rather, she raises these children as her own. All of the children receive an education and many go on to technical school or college. She has pictures hanging of her children that have gone on to become engineers, teachers, and other professionals. She beams with pride as she talks about her children. If I stopped here, we would all still agree that this is a remarkable woman, but she does so much more than just become a mother to the motherless. On her compound she has a community hospital providing preventive health and outpatient care. They had literally just delivered a baby when we toured. Her organization provides HIV/AIDS preventative education and has a training center for women to teach them sustainable trades. She supports more than 14,000 orphans and vulnerable children in several locations in Ethiopia. They do micro financing, rural agricultural development, and formal education. The list goes on and on. The impact this one woman has made is incredible.

We asked her what the main issues that her organization faces, and the answer was the same as we heard from nearly all organizations, funding. They lack any sort of major sponsors. They have been supported in the past and still in some capacities, by Oxfam, USAID, UNICEF, and Glimmer of Hope. But the economy is very tough right now and their support has decreased substantially. And as many of you likely know, voting is occurring now on cutting foreign aid. This will likely happen and the organizations supported by this foreign aid will suffer. This is where I believe it is the responsibility of the church and individuals to step in. (In a later post, I will discuss our meeting with USAID. It was very interesting.) I plan on financially supporting this organization and taking our team here when we return to Ethiopia. But I have to do some research on how to financially support. The organization is run completely in Ethiopia and the website is not very helpful. They do have a partner organization in Italy… but again, not very helpful. But that is kind of exciting to me. This is still very much a grassroots organization whose focus is clearly on their mission. I’m hoping some excited Americans can help this organization make reach its fullest potential with the right resources.

As we were leaving, Abebech turned to us and said, “I have raised children older than both of you, you are now my children. You are welcome here anytime.” It was a very sweet moment. I think of all the organizations that I saw on my trip, this is the one that I may choose to focus my time and energy. It’s a worthy organization making an incredible impact. 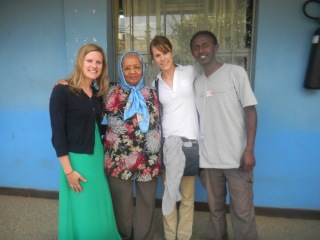